No sooner did I write about the importance of combining text with images in email design did I come across this email from the New York Jets: 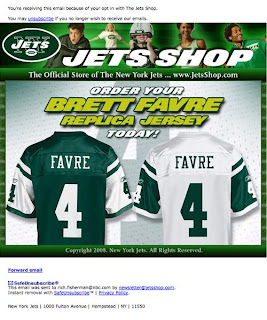 It’s lovely to look at, but it goes against everything I believe in as far as email design is concerned. I’ll give the team credit for blasting this message at 4 a.m., mere hours after the deal to acquire QB Brett Favre transpired. But I wonder how many Jets fans, before they’ve had their morning coffee, opened up their email to find something that appeared as jibberish to them. This could have been how some even learned that their beloved Gang Green was now home to the former Green Bay signal caller!

I know, more questions than answers here. But another example of how something rushed into the pipeline could have resulted in some missed opportunities.

View all posts by Sandi Solow →

Thanks in advance for your interest in my newsletter. A form with more fields will pop up after you hit submit.

Email design: The good, bad and ugly
Study: Email is cheap and we like it